This project was done by Graham at The ReStore  Midleton in Cork, Ireland. We had completed a number of restoration projects for a lovely customer called Stephanie, each one more challenging than the last. The most recent one came when Stephanie walked into the shop carrying what looked like a pile of old wood under her arms! Grinning from ear to ear, she announced that she had been testing us and that she had saved the best till last! She literally dropped the pieces of wood on the workshop floor and all of us then laughed. It turned out that the pile of wood was in fact the remains of a pair of Mahogany Victorian Hall Chairs that had been in Stephanie's family for generations. They would dated back to c.1880 and had beautiful turned legs and carved backs.

Judging by the amount of nails, screws and glue it was clear that there had been many previous attempts at repairing the chairs over the years. This first thing was to establish what we had and what parts could be reclaimed. Trying to piece together the bits of wood, we realised that the backs and most of the legs were intact and salvageable with some minor enough repair work, but that the wooden seats  were sadly all broken and missing strips  Stephanie gave us free reign to reuse and repurpose any parts that we could to make her a new item that would mean that in some part that the chairs would be available to pass on to her own family and see out another few generations. We suggested that we could possibly make a nice bench using the 2 beautiful backs and the legs and make a new seat to span the length of both chairs. Stephanie was delighted and said she didn't think that would even be possible but she placed her faith in us and told us to  'Fire Away!'

This project was a labour of love for sure, Not one to be defeated Graham decided that he would 'go for gold' and try and see if he could get Stephanie and her family back her pair of chairs. Putting aside the bench idea, he set about stripping and deconstructing the previous repairs, extracting all the old nails and screws, re-gluing, clamping, remaking joints and  spending hours trying to put together the jigsaw puzzle that was the chairs. He finally emerged from the workshop with not a bench but the outline structure of 2 full chairs.

The next part of the challenge was to restore the beautiful wood to its former glory. For this he chose General Finishes Gel Stains. He mixed Georgian Cherry and Brown Mahogany in equal parts to create a luscious red brownish colour to help enrich and bring out the beautiful tones of the wood grain in the mahogany. He applied 2 coats of the gel stain mix. Satisfied that he had achieved the desired richness he then followed up with 3 coats of HP Top Coat in satin. In place of the previous wooden seats which were incomplete, he made new padded seats for each of the chairs and chose a beautiful blue and champagne silk damask fabric for the upholstery which really complimented the wood and was in keeping with the age and era of the chairs.

Delighted with the result, we called in Stephanie to collect what she thought was her 'Bench'. Shocked, surprised and totally delighted, Stephanie was close to tears when she saw the chairs had been fully restored, she never dreamed it was possible. Just the look on her face made us feel all the hard work was worth it! 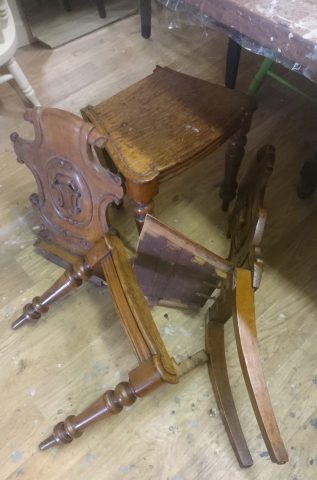 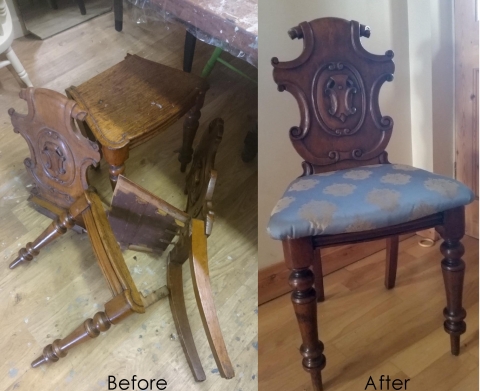 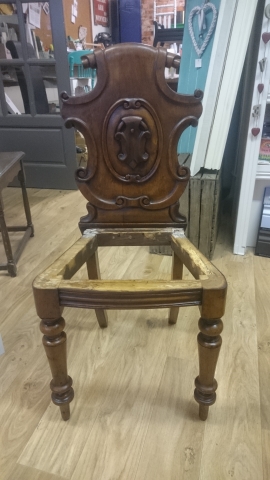 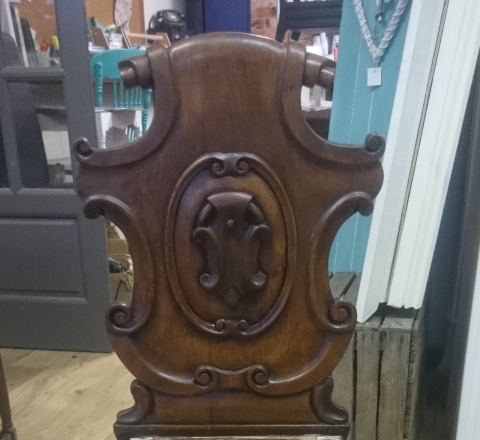