By Mike Reddy, President at All Access Adaptations, LLC in Booneville, AR.

When asked if I could cover 31 feet of 10 foot tall wall with whiskey barrel staves I wasn't really sure how I would go about it.  After a lot of thought, I put together a mock up design and was awarded the job.

Faux timbers were produced in my shop with a lock miter cutter on a shaper equipped with a stock feeder as some of them were 10 feet long.  This made the job of aligning and gluing up the joint much easier.  Multiple steps were used to distress the timbers.  A reciprocating saw (Sawzall) was run down the side of the timbers with a course blade to give the surface a rough sawn look.  A power planer was used down the edges at different angles and depths to replicate a hewn edge.  A distressing paddle with several sharp screws was dragged down the surface to create deep grain and scratches as well as tapping the paddle to produce fake worm holes.  Finally a chain with nuts and bolts attached was used to beat more distress marks into the surface.  After a quick sanding and application of two coats of GF Milk Paint Millstone, all those distress marks were ready for some GF Glaze Effects Van Dyke Brown to make them contrast with the background and stand out.  A coat of GF Enduro Clear Poly was used before and after the glaze.  Before to help the glaze be more workable and after to lock the glaze in.  Scuff sanding was performed in between coats to insure adhesion and provide for a smoother finish.

Faux steel plates were made out of 1/4" MDF and hardware was cast with body filler in silicone molds made in the shop from actual hardware pieces.  Once the hardware was glued on the MDF, the plates were ready to accept multiple coats of GF Lamp Black Milk Paint.  The Milk Paint solely brought an amazingly real look to the faux plates as no other finish was used on them.

The office door was removed, stripped, had sawmarks ran down the length to look like seperate boards and was then distressed.  The same finishing schedule as was on the timbers was applied.  Faux steel strap hinges were made in the same process as the faux steel plates.

Siding in the top center panel with boxes for light fixtures was finished much like the timbers but with more glaze.  This section willl house the corporate logo.

75 year old retired barrel staves were brought in by the client.  After spending a few days pressure washing them, they were ready for GF Clear Poly in Satin.  The Clear Poly brought out the character of the oak staves that had been hidden for so long.

All finishing for this project was sprayed with a Fuji HVLP system equipped with 3M PPS (Paint Preparation System).

Installation of the wall took several days to complete with late nights onsite.  It was all made worthwhile when the client saw the finished product and could not say anything but 'Wow!' for a few minutes.

Note: No good vantage point existed for photographing the whole wall.  It is in a secure entry corridor that has glass doors and windows seperated by their frames running parallel 5 foot from the project wall. 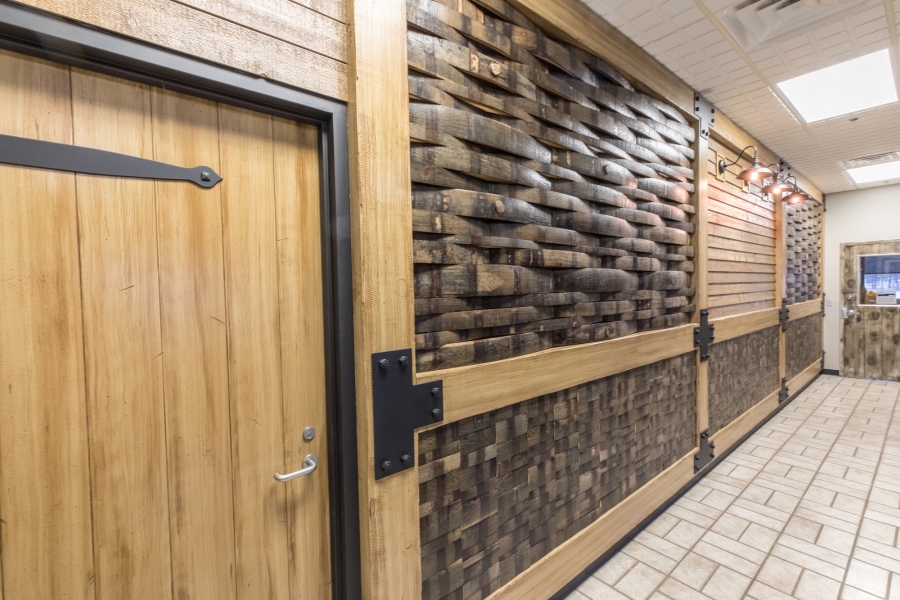 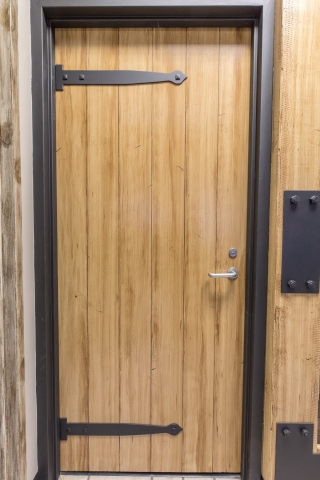 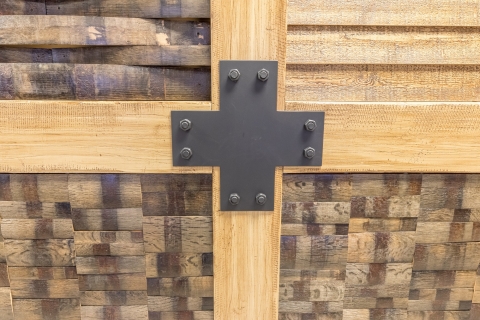 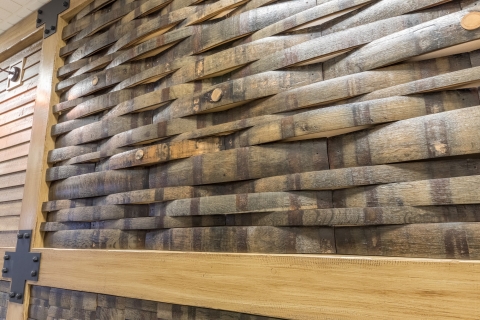 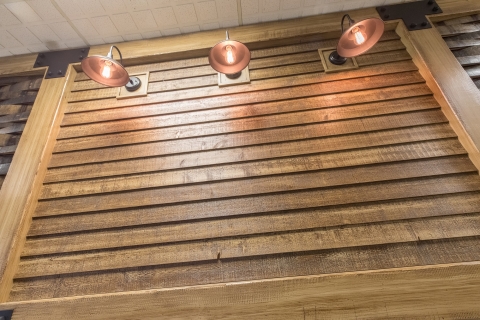 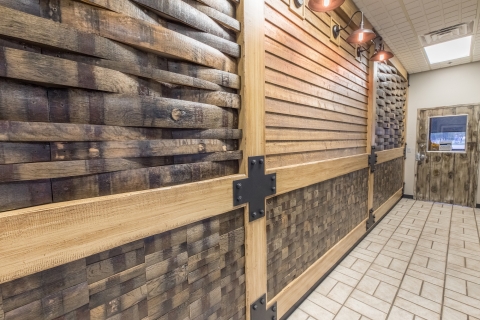