The story starts out 4 years ago.  I bought this piece, in the middle of winter, with the intent to buy a new house someday and use it as our kitchen island.  It was currently being used as a workbench in a machine shop.  It was in a barn with no solid shoveled walkway and I could barely lift one end.  But I wasn't leaving until I had it in the trailer!  Once home, it was extremely heavy, so it even got it's own carts to be able to move around and out of the way.  2 years in a storage unit later, we finally bought a new home.  It won't fit....  Now time to refinish.  First, all the doors and old hardware needed to come off and each one marked perfectly to ensure they fit back to where they go.  Handmade cabinets are not all the same exact sizes.  (First really came it's nickname because we've had it for so long!)  Then, the old top piece comes off.  Multiple layers of other products was completely stuck to the top.  Then to flip it over, add a new support around the entire base.  Most of it was put together using nails.  Screws needed to be added to secure the entire base of Big Yellow.  Originally, I ordered 4 feet to go in front.  It just didn't look right.  Wait another week and a half to get 4 more decorative feet.  I needed it to stand tall enough to become a kitchen island.  Attached all the feet and flipped it back around.  New base trim needed to be added.  Over the years, there were unmatching pieces put around the base.  Hours upon hours (and more hours and sandpaper), it was wood filled, sanded and sanded again!  Then using General Finishes Buttermilk milk paint, was painted to nearly it's original color.  It suited it so nice!  (Plus, it's nickname was already Big Yellow.  No sense in changing it now!)  Then a few more hours of distressing it and adding Miss Mustard Seed Antiquing Wax over the entire thing to give it that "old" feel again.  All finished with a General Finishes Satin Top Coat. We decided to stick natural, and added a butcher block top to finish it off.  The handles were replaced but the original hardware was repainted and sealed.  After storing it for 4 years, moving it nearly 60 miles away when we moved, and taking at least 4 solid days worth of work, it is now ready!  And it was very much worth the wait!! 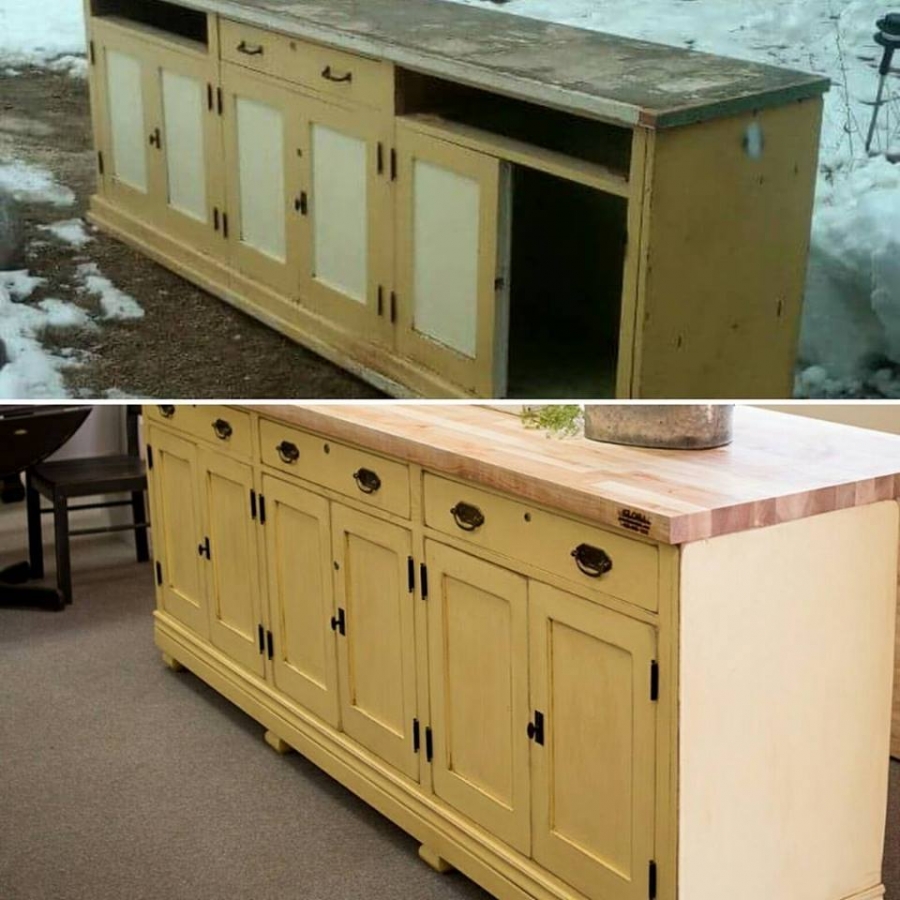 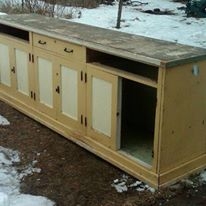